Python is a language with many qualities, but few would claim that performance is among them. While libraries such as Numpy can be used, they are not as flexible as being able to write code directly in a high-performance language. Unfortunately, writing the performance-critical parts of a Python program in (say) C is not always a good experience, and the interfacing between the Python code and the C code can be awkward and inelegant (although to be fair, it is still nicer in Python than in many other languages). It would be more convenient if we could compile a high-performance language directly to a Python module that we could then import like any other piece of Python code. Of course, this entire exercise is only worthwhile if the code in the resulting Python module executes much faster than manually written Python. Fortunately, when most of the computation can be offloaded to the GPU via OpenCL, the Futhark compiler is capable of this feat.

OpenCL works by having an ordinary program running on the CPU that transmits code and data to the GPU (or any other accelerator, but we’ll stick to GPUs). In the ideal case, the CPU-code is mostly glue that performs bookkeeping and making API calls - in other words, not resource-intensive, and exactly what Python is good at. No matter the language the CPU code is written in, the GPU code will be written in OpenCL C and translated at program initialisation to whatever machine code is needed by the concrete GPU.

This is what is exploited by the PyOpenCL code generation backend in the Futhark compiler. Certainly, the CPU-level code is written in pure Python and quite slow, but all it does is use the PyOpenCL library to offload work to the GPU. The fact that this offloading takes place is hidden from the user of the generated code, who is provided a module with functions that accept and produce ordinary Numpy arrays.

To demonstrate this capability, we will implement a simple Mandelbrot set visualisation program in Python. We will use Futhark to compute the set and produce the pixel data, and make use of Pythons png module to write an image file with the result. Our program will consist of two files: mandelbrot.fut and mandelbrot-run.py.

(Do not worry too much about the specifics of how the Mandelbrot set is defined - it is not the point of this post.)

We can now define the core function that determines whether a given point on the complex plane is part of the Mandelbrot set. We do this by defining a function divergence that returns the iteration at which the loop diverges (or the limit, depth, if it does not):

The mandelbrot function returns the divergence point for the complex number corresponding to a pixel in a given view of the complex plane:

Given the point of divergence for a pixel, we can decide on a colour, which is encoded as RGB within a 32-bit integer (the alpha channel is not used):

Finally we tie it all together - the main function computes the point of divergence for each pixel, then colours them:

We can test our code by compiling it to a standalone program:

Of course, it is not very satisfying to look at fractals as arrays of numerically encoded pixel values. Hence, we pass --library to futhark pyopencl:

This produces a file mandelbrot.py defining a single Python class mandelbrot, which we can access from ordinary Python code, as shown below.

We will need to import a PNG encoder, Numpy, and of course the module produced by futhark pyopencl:

Then we create an instance of the class mandelbrot:

The constructor may take additional arguments specifying which OpenCL platform and device to use, as well as other configuration parameters. The class defines a single method, main, corresponding to the main function of the Futhark program. We define a handful of constants which we pass to the method:

The result value is stored in the variable fut_image. Since we declared the return type of main to be [screenY][screenX]i32, the returned value will be a two-dimensional Numpy array of shape (screenY,screenX). We cannot pass this directly to the png library, as it expects a three-dimensional array explicitly encoding the different colour channels. Fortunately, this array transformation is easy to do with Numpy:

And now we can simply invoke the png library:

The result is this moderately attractive fractal in the file mandelbrot.png: 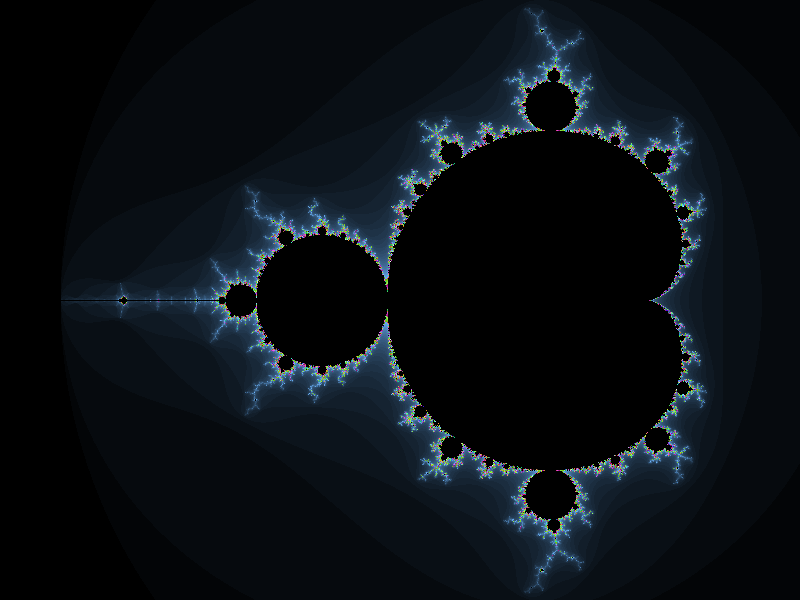 Every entry point in the Futhark program becomes a method in the generated class. An entry point is any function named text, as well as any function defined using the keyword entry instead of let. In most cases, the type of the Futhark function maps easily to the Python world. For example, a Futhark function accepting three parameters of types [][]f64, []i32 and bool will be translated into a Python method accepting a two-dimensional Numpy array of numpy.doubles, a one-dimensional array of numpy.i32s, and a single numpy.bool. And if the Futhark function returns ([]i32, f64), the Python method will return a tuple of two values: a Numpy array of integers and a Numpy double-precision float.

Things are more complicated when the entry point accepts or returns types that do not correspond easily to Numpy types. Actually, the reason is that the generated code makes use of Futhark’s internal value representation, but I’m happy to blame Numpy instead. For example, a function that accepts an array of pairs (e.g. [](i32,f32)) will be turned into a method that accepts two arrays: one of integers and one of floats. Similarly, all tuples are flattened. This not only means that a Futhark function returning (i32, (f32, f32)) will be turned into a Python method returning a tuple with three elements. It also means that a Futhark function taking an argument of type (f32,f32) will be turned into a Python method accepting two arguments, each being a float.

The best workaround is to only use simple types in entry point functions: return only flat tuples, and accept neither tuples nor arrays of tuples. You can still use tuples and arrays of tuples in your function bodies and internal functions, it is only the entry points that are problematic. The zip and unzip operations are entirely free in Futhark, so ziping two passed-in arrays into a single array of pairs carries no overhead.

We have an implementation of Game of Life that uses Pygame to render the ongoing simulation. It supports several variants of the game rules, some of which look rather interesting when visualised. It is also an example of a program that uses multiple entry points.

We also have an interactive Mandelbrot explorer, the Futhark core of which is very similar to the one described above, but where we have written a Pygame interface that allows interactive scrolling, zooming, etc.

We are quite interested in developing more interesting use cases for Python-Futhark interop. The best use cases are those that perform a good bit of work on the GPU, to amortise the relatively inefficient host-level Python (not to mention copying back and forth between system memory and the GPU). If you can think of something, or even want to try your hand at implementing it, please contribute!